My lived experience of suicide bereavement 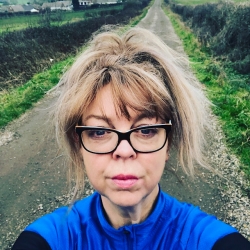 I would say my awareness of suicide and bereavement to suicide before losing my husband Ian in 2015 was limited, in fact I would say I was immune to suicide. Now as I reflect on my life before Ian’s death and my perception of suicide and those bereaved to suicide, I acknowledge I had a fixed and closed opinion and actual judgement of suicide.

I believed it happened to other people and would never affect me or my family; how sadly naïve I was.

This is also quite astounding given that I am a nurse of 35 years, who has worked in various settings including palliative care, so worked closely with bereaved individuals and families. Like I said, I saw suicide as something that happened to ‘other people’. Suicide is indiscriminate; I sadly now have a much fuller and clearer concept and understanding.

In October 2015, I lost my beloved husband Ian to suicide. Ian was a vibrant, clever, funny and kind man who was a devoted father. His death completely rocked our family and all our whole world and lives changed from that day.

Being bereaved to suicide throws you into a complex level of grief; the emotions of blame and ‘what ifs’ resonate profoundly.

I wasn’t aware that being bereaved to suicide, also places you in a higher risk group of suicide yourself.

After Ian’s death, I thought as a family we spoke more openly about suicide and how it left us all. My youngest daughter Beth had always struggled with her own mental health and anxiety, but she was open and honest, and I felt this was our safety net; that our strong bond of love was enough to keep her safe. Sadly, it wasn’t. In 2019 as suddenly as Ian’s death, suicide crashed its way back into my life with Beth dying to suicide.

The loss of my youngest child was heart shattering. When you lose a child, all your future memories with them are stolen away from you. You lose their legacy and all you are left with are the old memories. As a mum we envisage our future within our children, the gold rush of future dreams and life’s ambitions were taken from Beth in that moment.

Today I cherish the old memories, in fact there are no words to describe how much old photos, videos and memories in my heart are worth to me.

The loss of a child is not something you get over, but it is something you live with. I am not a negative or angry person and accept hindsight bias alters our memories and causes many guilt and pain, which is why out of my personal losses to suicide, I want to help others.

I accept the stigma of suicide continues, but I believe that we all have a part to play and with the positive work we all do, I truly believe we can work together to prevent further deaths to suicide by changing mind sets and culture.

The more I talk about suicide bereavement the more open others can be. And for anyone supporting someone that has lost someone to suicide, be there for your loved one, it’s about listening and not feeling like you must provide all the answers to what has happened.

If you have been bereaved by suicide, there is support available here.